Jordan(also called Air Jordan) is a popular sports brand which was named after one of the most popular and great basketball players of all time-Michael Jordan. The first Air Jordan shoes designed by Peter C. Moore(Nike designer), were created only for Michael Jordan in late 1984 and introduced to the general public on April 1, 1985.So there comes a very hot question. Who owns the Jordan brand, Michael Jordan or Nike? 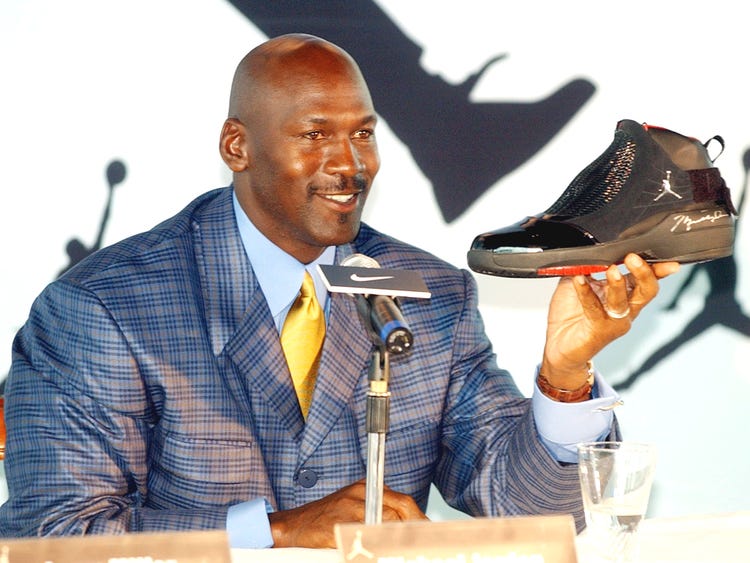 Nike is accountable for designing, making and selling the goods from the Jordan Brand.The very first powerful thing from the Jordan Brand was that the Air Jordans shoes published in 1984. It had been created by Nike and worn only for Michael Jordan in early 1984, also introduced to the general public in late 1984.

For years Jordans have been the backbone of sneaker culture and the brand’s appealing logo is what put everyone in awe. Jordan’s Jumpman logo is one of the most revered and celebrated logos in the footwear industry whose origins go way back.

In 1984 Micheal Jordan was photographed pulling off the iconic Jumpman pose for a life magazine photoshoot ahead of the Olympic games in Los Angeles but the funny thing is that Nike wasn’t even part of the story at this point. Micheal pulled the first-ever Jumpman pose off in New Balance basketball shoes.

Soon after that, he signed off his contract with Nike, and by 1985 the first-ever signature Air Jordans hit the shelves. And that same year Jordan recreated his iconic pose but this time in his smashing pair of Air Jordan 1 black toes.

The original Air Jordan one tank tag was featured with the photo, the rumor has it that the designer of the shoes Peter Moore wanted to use the original shot from the magazine photoshoot but couldn’t because of copyright issues. The magazine photographer Jacobus Willem Rentmeester also tried to sue Nike in 2015 claiming the brand has used his idea only for the judge to dismiss the case.It might come by as a surprise when we say the logo we are used to now was not even featured on the Air Jordans 1 or 2. They were launched with the wings logo which is still in use to this day on the retro editions of the sneakers. The logo features the word Air Jordan in a wavy tag on top of a basketball that has wings on either side. The wings were to represent the incredible hangtime of Micheal Jordan.

In 1987 the legendary designer Tinker Hatfield designed the Air Jordan 3 which is still regarded by many as one of the silhouettes ever. It was the very first Air Jordan to utilize the now-iconic elephant print and also one of the first sneakers to showcase Nike’s visible air unit. And of course, we were introduced to the Jumpman logo as we know it today.

The logo was placed on the tongue of the shoe which was just a perfectly designed silhouette of the perfectly timed photo of Micheal Jordan.

Since the original version, the Jumpman has remained unchanged, and as the brand grew the logo started to appear on lifestyle apparel as well as sporting goods. For a brief amount of time, Nike added Jordan spelled out under the Jumpman logo but soon removed it as the logo itself was quite distinguishable. Till today even after the retirement of Micheal Jordan the Air Jordans are still as popular as ever.

1. What is the Jordan logo called?

The logo on the jordans is called the “Jumpman” logo which is a simple silhouette of Micheal jordans iconic pose from a photo shoot he did for life magazine in 1984. Which was later outlined and designed to be one of the most known logos of all time by Peter Moore in 1988 replacing the wings logo on the Air Jordans 1 and 2.

2. What did Nike offer Michael Jordan?

Nike offered Michael Jordan a five-year contract of 500,000 US dollars per year with a proportion of their sales which was something Adidas was not ready to do at the time. It has been more than 13 years since Jordan retired and it’s no wonder that he still earns more than every NBA player at the moment when it comes to sneaker income. As of Forbes report, he earned 130 million US dollars in the year 2019 alone.