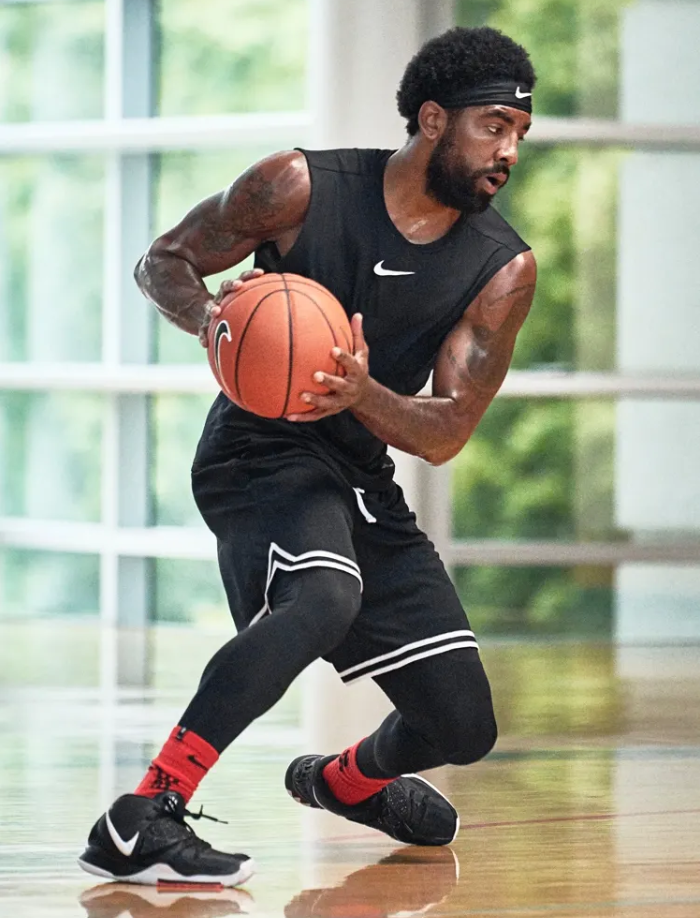 Kyrie Irving joined an elite class of basketball players when his number was called for a signature line. Kobe Bryant, Kevin Durant, and LeBron James welcomed its fourth member of the signature basketball lines under Nike.Nike signed an advertising contract with Kyrie Irving and releasing Kyrie Irving basketball shoes from 2015.

Each iteration of Kyrie Irving basketball shoes builds upon past incarnations and draws upon classic styles to create shoes that add a hint of nostalgia to an otherwise modern design — along with some of Irving’s eccentric touches.

If you want to buy cheap Kyries,make sure to visit Uafactory, where a wide variety of cheap Kyries are available at the right price.

Here’s a look at the complete history of the Kyrie Irving basketball shoes line with Nike, from the Kyrie 1 through the latest Kyrie release. 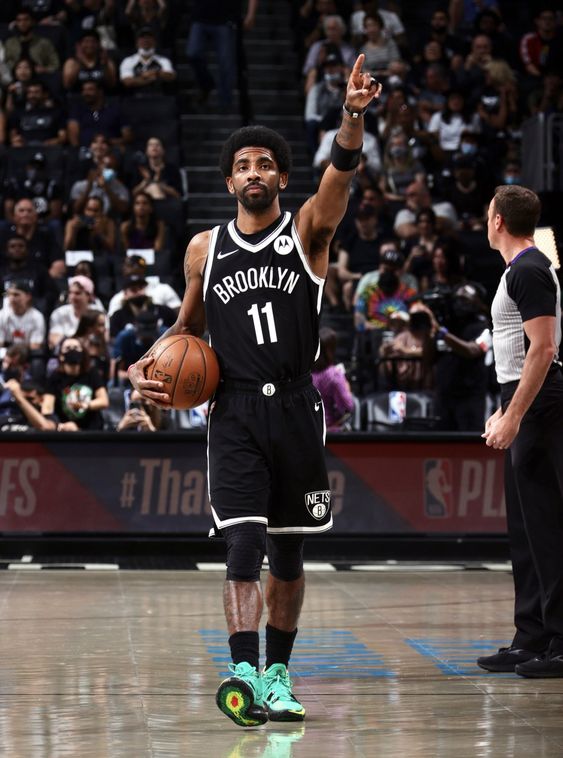 Kyrie Irving is an American professional basketball player for the Brooklyn Nets of the National Basketball Association (NBA). He was named the Rookie of the Year after being selected by the Cleveland Cavaliers with the first overall pick in the 2011 NBA draft. A seven-time All-Star and three-time member of the All-NBA Team, he won an NBA championship with the Cavaliers in 2016.

Irving played college basketball for the Duke Blue Devils before joining the Cavaliers in 2011. He won the Most Valuable Player (MVP) award for the 2014 All-Star Game. In the 2016 NBA Finals, Irving made the championship-winning three-point field goal to complete the Cavaliers' historic comeback over the Golden State Warriors. After another Finals appearance in 2017, Irving requested a trade and was dealt to the Boston Celtics. He played as a Celtic for two seasons, after which he signed with the Brooklyn Nets as a free agent in 2019. He has also played for the United States national team, with which he won gold at the 2014 FIBA Basketball World Cup and the 2016 Summer Olympics.

For Kyrie, it all started with the Nike Kobe 5 ‘Bruce Lee’. At 17, Kyrie played at the Nike Extravaganza, a basketball tournament hosted in Los Angeles, California. Kyrie took a W, and from that point on, the sneaker entered a kind of personal folklore.

‘I [was] wearing these Nike Kobe “Bruce Lee” editions for the game. We ended up winning, and from that point on it was my favourite shoe, ever.’

Kobe Bryant not only served as an inspiration on the feet, he also influenced Kyrie’s on-court basketball philosophy, with the take-no-prisoners ‘Mamba Mentality’ helping Irving to become one of the most nuclear ball-handlers and scorers in the league. The Nike Kobe 5 ‘Bruce Lee’ would also prove the catalyst for one of the most popular Kyrie 3 colourways: the ‘Mamba Mentality’.Taking a gash across the sneaker’s toe unit, the Kyrie 3 was hit with a retina-burning yellow reminiscent of the Kobe 5, the sneaker embracing new snakeskin detailing fused with some of Kyrie’s signature motifs, altogether becoming one of the baddest sneaker mashups in history.

Before LeBron and Kyrie linked up for one of the most stunning Championship comebacks of all time, a young Kyrie was quietly cultivating his LeBron James collection.

‘I would always buy LeBrons ... I had to have them, and there were so many colourways and so many inspirations. Now that I’m his teammate, I see where all this comes from.’

At just 22, Kyrie inked a deal with Nike, joining a short list of NBA players to have their own signature shoe. The Kyrie 1 was deeply personal, incorporating architectural vernacular from the Sydney Opera House (Kyrie was born Down Under), the date his mother died (when Kyrie was just four), and a double ‘H’ on the outsole serving as a reminder for him to ‘stay hungry and humble’.

How did Kyrie go in with his first outing in the 1? He dropped a lazy 37 on the Knicks at Madison Square Garden. 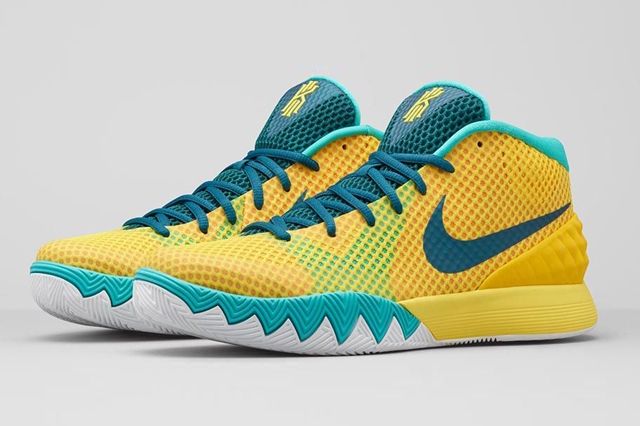 In 2014, Irving was entering his third year playing for the Cleveland Cavaliers after being the first overall draft pick in 2011. It was also the year he joined Nike’s esteemed Signature Athlete Family and released the Kyrie 1 basketball shoe. The shoe was spearheaded by Nike Basketball Footwear Design Director Leo Chang and featured a mid-top trim and a composite textile cover over a mesh base. The shoe featured a dynamic mix of black, white, bright crimson, and anthracite and was nicknamed “Dream” as a nod to Irving’s realization that his dream to play in the NBA has come true. Overall, the Nike Kyrie 1 is quite comfortable, light, and convenient to move but not too monotonous in design. 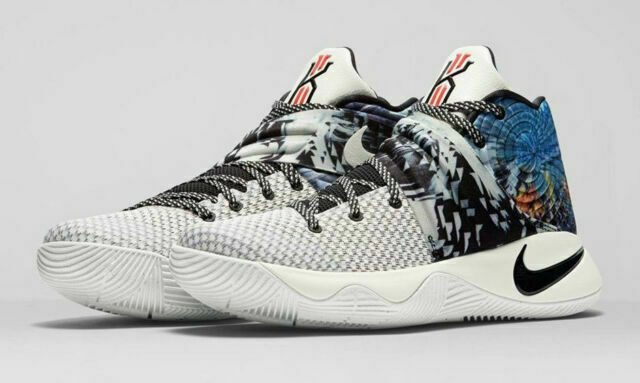 The Kyrie 2 was released in 2015 and featured an updated look that was revolutionary for a basketball shoe. It was inspired by motorcycle tires since players tend to careen around the court at dangerously low angles. This was also when Nike started to think about how they could create a shoe that only they could make, as customizers started painting shoes in colorways resembling the Kyrie 1s. The “What The” version of the Kyrie 2 moved away from the usual graphics and color mashups in favor of monochromatic styles with minimal color pops. Irving also incorporated unique 3D graphic elements into the shoe that symbolize different stories from his life. The Kyrie 2 ‘Finals’ were a black & gold colorway that Kyrie wore when he hit that epic clutch 3-pointer in Game 7 of the 2016 NBA Finals to win his first NBA championship with the Cleveland Cavaliers. 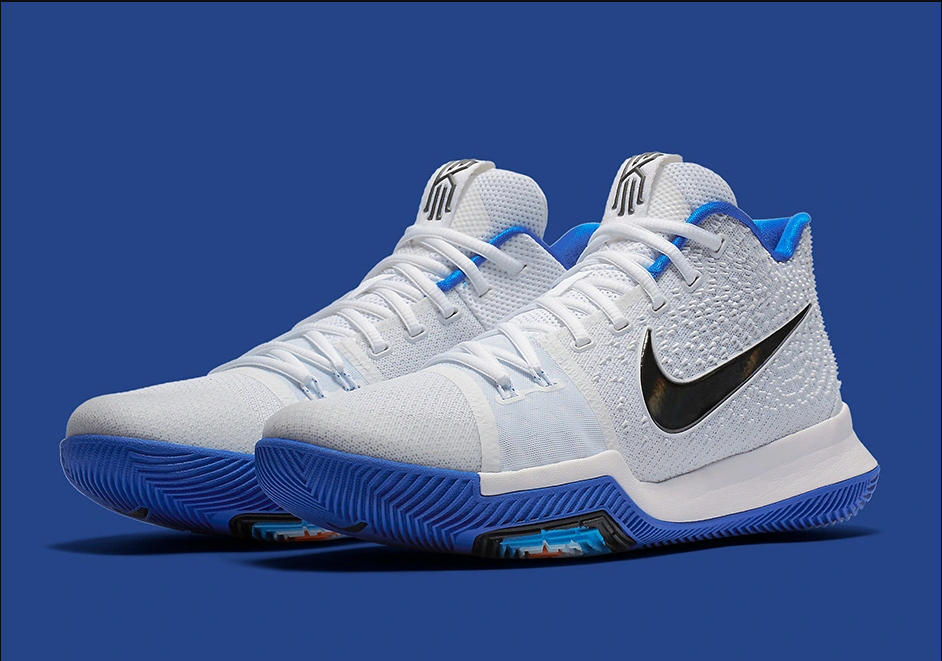 This was the last shoe that Irving wore playing for the Cleveland Cavaliers as he transitioned to the Brooklyn Nets. This model was released between 2016 and 2017 in numerous colorways. The design kept the wrapped grip pattern and low-to-the-ground feel from the Kyrie 2. It also featured a new lace form that allowed players to keep their forefoot down and stay locked in. The shoe featured traction pods that helped with starting and stopping on a dime. The “JBY” (Just Be Yourself) and “H+H” (Hungry and Humble) mottos also adorned the tongue as nods to some of Irving’s favorite mottos and words to live by. His daughter’s name also appeared around the Zoom Air heel, and nods to his mother appeared throughout the design, such as a rose, Roman numerals for her birthday, and her name appearing on the rubber in the Zoom Air cushioning unit. 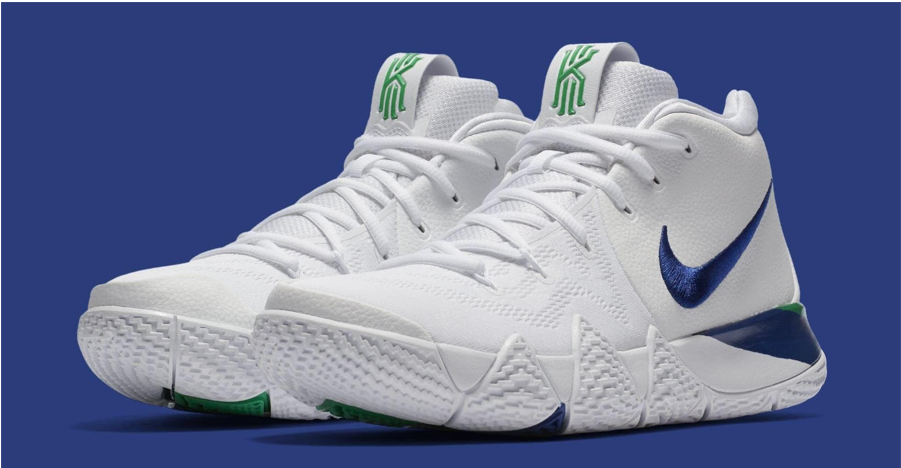 The 2017 design, dubbed Kyrie 4, was the first Kyrie Irving basketball shoe to be designed with Ben Nethongkome, Senior Footwear Designer for Nike Basketball, as the lead designer. Nethongkome previously worked on the Kyrie 3, but for this iteration, they worked on improving the underfoot cushioning, which was solved with a mid-sole Zoom Air heel unit and a zig-zag flex groove on the sole of the shoe to provide enhanced traction. The overall aesthetic and blocking of the shoe were inspired by Irving’s interest in vintage Nikes and Jordans. Despite his love for the classic silhouettes, Nethongkome stressed that they should innovate the shoe, which resulted in a zoned-mesh blocking with classic materials like suede and leather making appearances. 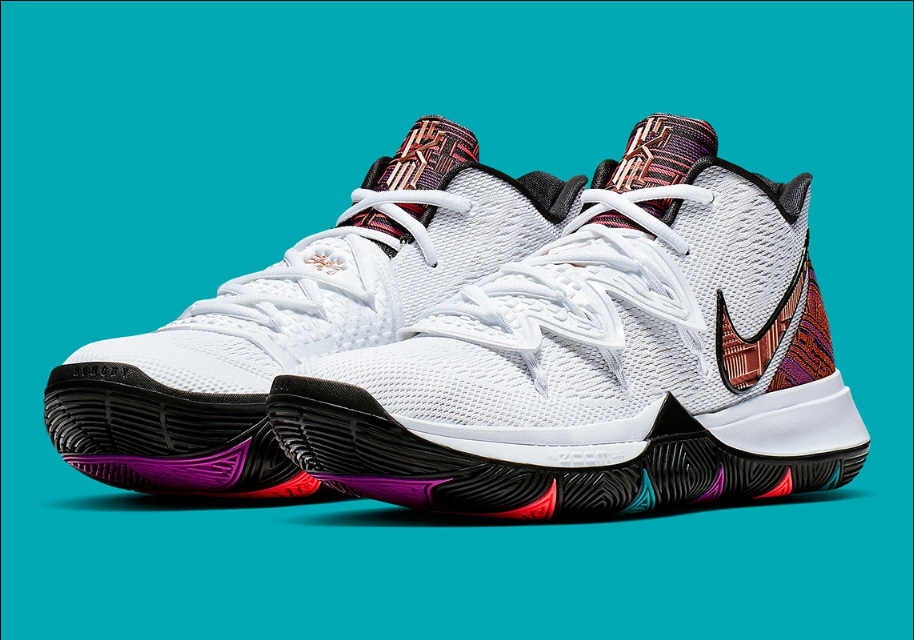 The Nike Kyrie 5 was released in November 2018.The Nike Kyrie 5 has a blend of previous kinds of shoes. It’s traditionally tough with a small body, complex and multi-colored soles.It brings you Nike’s cutting-edge technologies in a highly affordable way. Nike, extraordinarily reasonable and fit, arranges all.

However, the Nike Kyrie 5 is much more than that. The biggest attraction, before you know how its technology is, is the design. The shoes have an extremely eye-catching look with the bird-shaped Flytrap system placed right at the laces. All add to Kyrie 5 the best, along with the big highlights kept from Kyrie 4. Compared to the previous four shoe generations, this version owns Zoom Air Turbo.

Nike equips a Zoom Air piece just below, helping the wearer feel smoother in movements. Unlike regular Nike Zoom Air pods, Zoom Air Turbo is divided into six pieces that stick together, helping the force respond more quickly and elegantly. The rest of the cushion is regular phylon. 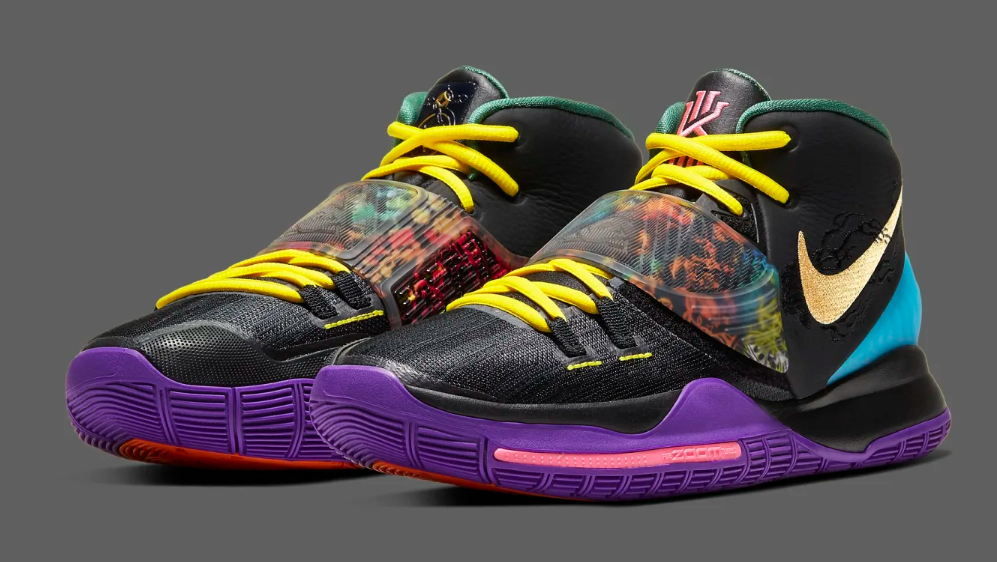 The Nike Kyrie 6 was released in November 2019. Returning to the original black and white color, Nike Kyrie 6 has an innovative design that makes it new, youthful, and dynamic. The Nike Kyrie 6 is the design between traditional classic values and the high technology of the new generation. As a result, it is filled with solid and bold breakthroughs.

The Nike Kyrie 6 features classic accents like a natural leather upper and a midsole strap inspired by ’90s basketball shoes, with a few new additions like all-new cushioning technology. Or some modern materials such as mesh or synthetic resin. These shoes are somewhat similar to the personality of Kyrie Irving, a dynamic young person with a mature soul.

One of the most noticeable Nike Kyrie 6 shoes elements is the exclusive design called “Traction 360”. The outsole features rubber bands that point in all directions to form a 360-degree circle. Nike will help Irving have the best connection with the court at all times. Not only technology but the “The eye” motif is also added to create a highlight for this design. This part is also designed in the most detail because it bears the most force when playing. 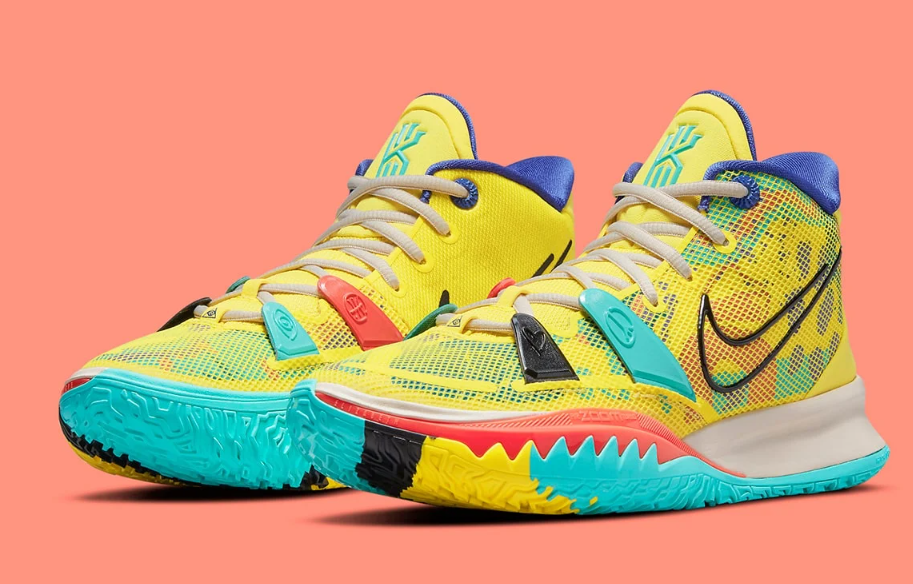 The Nike Kyrie 7 was released in November 2020.In 2020, the Kyrie 7 features some callbacks to Irving’s friend and Brooklyn Nets teammate, Kevin Durant. One of the designs is inspired by the KD 4’s “Weatherman” colorway, featuring a bold green hue and topographical map graphics for the sock liner and heel. The build of the shoe remains relatively the same with a Zoom-Air heel and a multi-colored outsole. Irving says that these shoes continue his tradition of adding small personal touches to his designs. 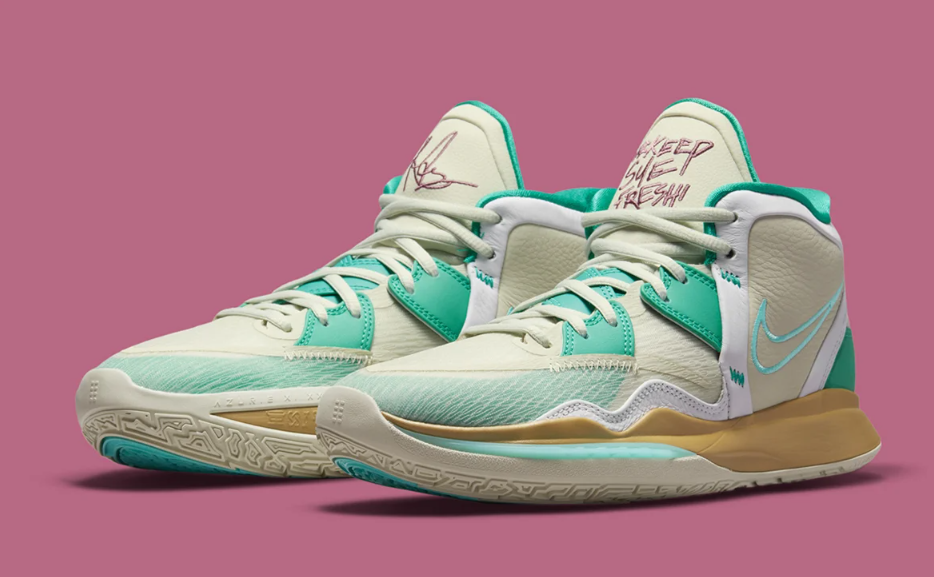 Kyrie 8 appears to inherit some heritage Nike Kyrie design language, reverting back to the Kyrie 6 more than the Kyrie 7. With that, the detached heel is reminiscent of the Air Yeezy 2, which was a not-so-secret source of inspiration for the Kyrie 6. There’s also a flowing leather overlay reminiscent of the Air Jordan 10 and Adidas-like middle lace tabs. Perhaps a nod to Kyrie’s love of Nike Skateboarding, the tongue looks a little more “fat” than the tongue on standard hoop models.

The Kyrie 8 is not free from controversy. Kyrie Irving himself trash-talked it while it was still in the works. However, it appears that whatever issues were in the protype have already been rectified. The Kyrie 8 that made it to the shelves has nice grip and a really supportive upper. This shoe is also comfortable and aesthetically loud like Kyrie himself; it's definitely something that can be worn off the court as a fashion statement.

Kyrie Irving basketball shoes are among the most affordable in comparison to other Nike basketball options. Whether you are an enthusiast of Nike Kyrie shoes or a fan of Kyrie Irving, cheap Kyries are worth an investment. We are expecting new released Kyrie Irving basketball shoes that combines the latest Nike innovations with fashion-forward designs we expect from Kyrie.While waiting, you can still shop the current cheap Kyries at Uafactory and revisit your old favorites.